Intermech was selected for this project for their critical fast-track capabilities. We assisted with constructability issues and began fabrication and installation of over 12,500 lineal feet of process piping while the design was being finalized, preventing costly delays to the client. 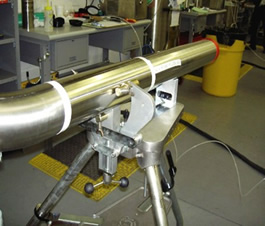 The new facility houses a range of pharmaceutical manufacturing (batch processing) activities such as fermentation, solvent extraction, organic chemical synthesis, and finishing operations. The facility's products include broad spectrum antibiotics, anti- parasitic drugs for human and animal health, a cholesterol lowering drug, a drug for the treatment of Parkinson's disease, a new drug for the treatment of human immunodeficiency virus (HIV) ,and the well-known vaccine GARDASIL, which is the only human papilloma virus (HPV) vaccine that helps protect against four types of HPV for girls and young women ages 9 to 26.

Intermech completed the main process piping distribution systems feeding Merck's Fermentation skids, Harvest skids, Chromatography skids, Buffer Prep Tanks, and the Microfiltration and Ultrafiltration skids, all of which are vital to the bulk manufacturing process from recombinant proteins and antibodies that will be used as various active pharmaceutical ingredients.

This recent addition to Merck's new production facility for vaccines further enhances their biotechnical capabilities and makes the Stonewall site one of the company's primary vaccine production sites. Intermech's scope of work performed had a contract valuation of over $3.5 million and was executed from June of 2009 through July of 2010.